Ben summed up his Seattle weekend with a video; I'll sum my Hawaiian weekend up with just one picture: 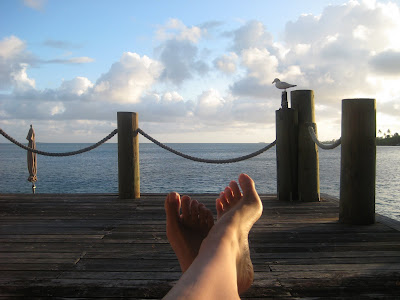 I had a wonderful trip with my mom and now I'm glad to be back home with my family.
Posted by Kristi at 2:47 PM No comments:

Well, I had a great weekend. I got up at 6am on Saturday, played some basketball, took a shower and headed to the train station. My office took the train to Seattle where we took in the Mariners-Yankees game, and since Kristi was off in Hawaii, John was kind enough to let my buddy Eric have a ticket to the game as well. When we got there, a bunch of us went to Serious Pie and ate some amazing pizza. I then met up with my bro-mance (according to Kristi)Eric, and we wandered around Seattle until game time. Eric thought it would be funny if we, every time we saw a Yankees fan (or whenever we felt liked it actually) to have one of us say "Hip, hip!" and the other would shout "Jorge!!!" This is in homage to the excellent SportsCenter commerical below.

We found this endlessly amusing. When we got to the box, every time Mr. Posada came to bat, right as the pitcher would throw the ball, I would again shout "Hip, hip!" and the entire box would shout the Jorge part. By then end of the evening, it seemed like we had the adjacent boxes and/or surround fans chanting right along with us. That or our group just got really loud. I'd like to think it was a combo of both.

We also chanted this on the train ride home (where our engine broke and we sat on the tracks for 2 extra hours) and when we exited the train. This will now be forever funny to me, even though I am sure it annoys the heck out of everyone else. But I laugh, Eric laughs, and the rest of the office laughed (at least at some point). And good times were had by all. Thanks a lot E.
Posted by Ben at 8:27 AM No comments:

This is what happens when you give a baby a bowl with Nutella, peanut butter, and caramel. I may have also given her the spatula with some chocolate cake batter. Any wonder why she's so chunky? 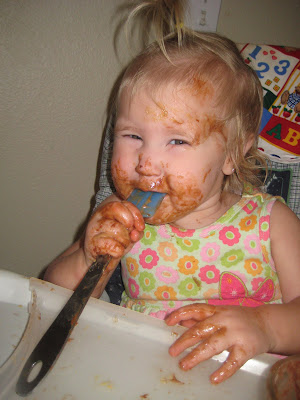