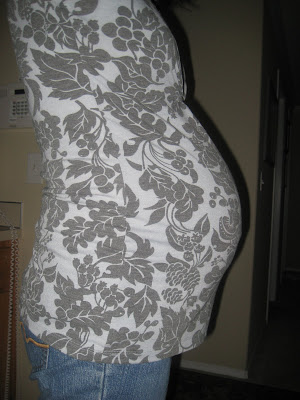 People keep telling me that my belly really isn't THAT big. They are all crazy. I am huge! I can barely reach my feet (I'm wearing sandals today so that I don't have to attempt to tie shoes) and my maternity clothes are already feeling quite snug and I still have 48 days to go! (Wow, when that doesn't seem like very long all of a sudden.) Anyway, I just want you all to know that I'm not going crazy. I measured my "waist" (let's be honest, you don't get to have a waist when your pregnant) about 2 weeks before Tyler was born. It was 38 inches. I'm already at 41 1/2 inches! I shudder to think of the stretch marks that await me. The really unfortunate news (for me) is that the baby is about to go through a growth spurt getting all fat and cute before it comes out. Good news for the baby, bad news for my skin. Maybe I should cut back on the chocolate cake and stick to fruits and vegetables. That would probably help with the weight gain too :-)
Posted by Kristi at 2:36 PM 2 comments:

I hear the ocean

We went to my grandma's house today and the kids know exactly where to go. She has a bowl of shells on her coffee table and the kids love to put them up to their ears and listen to the ocean. My favorite was when Tyler put a little clam shell up to his ear and could still hear the ocean. I think he's a little confused. :-) I'm always a little nervous that they are going to break something, but we've gotten lucky, so far... (knock on wood) 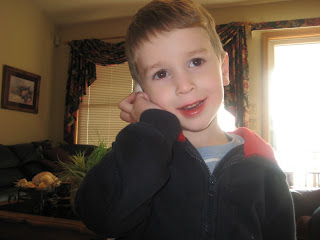 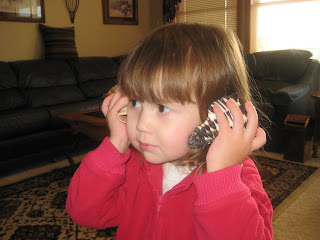 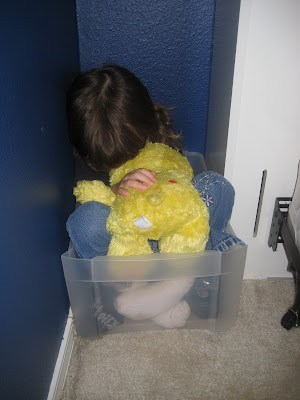 Sometimes a picture is worth a thousand words and this is one of those times. Nicole really didn't want to take a nap today but I finally just let her cry and things got quiet. I assumed that she just gave up and finally took a nap. I went on with my normal Tuesday afternoon chores and when 3:45 came around, I went to wake up Nicole so that we could go pick up Tyler from pre-school. I opened the door and both beds were empty! She can't open the door by herself, so I was thouroughly confused. I looked behind the door (where she usually sits if she's just waiting for someone to open the door) and she wasn't there. Then I remembered Ben telling me that sometimes at night she likes to harass Tyler and sits in his shoe basket by his bed and hits the wall with her head. I peeked over there and, sure enough, she had fallen asleep in his shoe basket with her care bear. She was totally sound asleep and when I tried to wake her up, she said she wanted to take another nap and just snuggled up with her bear and went back to sleep. There's two perfectly good beds in that room? Why in the world would she sleep in that tiny little corner? What a silly girl.
Posted by Kristi at 4:13 PM 3 comments:

The Holy "Ghost" and Beautiful Dancers

It is actually SUNNY today! I know you may not believe me, but the kids are outside playing "treasure hunt" right now (even though Nicole really should be taking a nap) and they seem to be so excited just to be outside again. It will probably start raining again tomorrow, so for now, they get to do whatever the heck they want, so long as they stay outside. :-)
So, Tyler is a Sunbeam now. It is so fun to walk by his classroom and see him in primary and it makes me a little sad to see him getting so big. But, he loves primary and his class only has 4 kids in it (there are 3 sunbeam classes though). He had a lesson on the Holy Ghost yesterday and the teacher had them make ghosts from a paper towel and a sucker. Tyler showed me and I said, "Wow, that's a really cool ghost!" and he said, "No, Mommy, it's the Holy Ghost." I'm pretty sure that the Holy Ghost doesn't look like that, but Tyler has been talking about how much he loves his Holy Ghost, so I really can't complain. Here's a picture of him with his Holy Ghost. 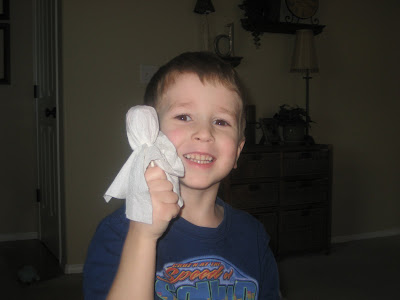 Nicole got a new dress from Grandma on Thursday and was very excited to wear it to church. She tried it on and Tyler told her that she was a "very beautiful dancer" (I'm not sure where that came from) and she thought that was a great idea. So, this morning, she told me that she wanted to be a beautiful dancer so we put her in a dress. She wanted to wear a different beautiful dancer (I assume that meant a different dress) and then she decided that it was going to rain today (the ONE day it doesn't rain) and had to carry her umbrella with her while she danced. Here's a picture of her taking a break from spinning in the family room. 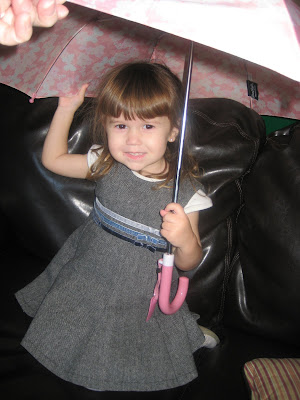 I think Tyler just locked Nicole outside, so I'd better go rescue her before she finds more worms to torment...
Posted by Kristi at 2:52 PM 1 comment:

It has been brought to my attention that my husband and son look similar. Just thought I'd share some pictures to show JUST HOW SIMILAR THEY LOOK! Maybe someday I'll have a child that looks a little bit like me. That would be cool.
(The picture on the left is Ben, the one on the right is Tyler, or is it the other way around...) 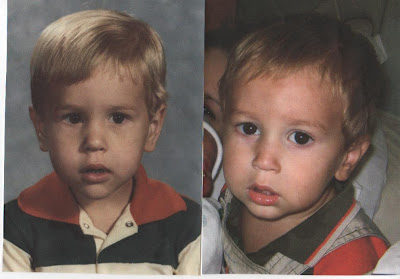 Your Welcome, to the future Mrs. Davis 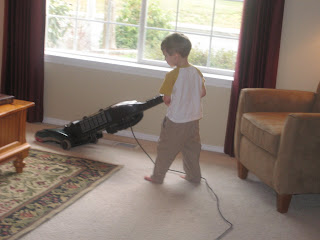 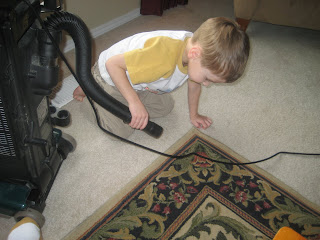 This is my own personal interpretation.

I do not come home 'without exception' with some sort of scrape, bruise or injury. In fact, I like to think I have been relatively healthy for a while now when it comes to sports. True, I did break my nose, but I guess that's what happens when one tries to play defense against a friend's shoulder with one's face. And the black eye thing was totally not my fault, I caught a random elbow in the face! Honestly, where's the sympathy? It's not like I wanted these things to happen! 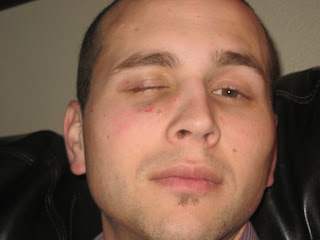 Anyway, I think that some people are just a little bitter when their husbands awaken them from their slumber to get some antiseptic applied to a wound, or to try and convince said wife to push a broken nose back in place. So what's the big complaint?! 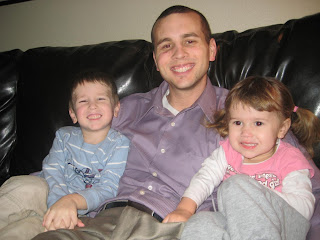 (See! You can hardly even see the shiner!)

My brain is hurting

Sometimes I get too much random stuff building up in my head and if I let it out, hopefully I will be able to let in some more useless junk that will again plague my life. So, here's me venting:

-How many of you have husbands that play church basketball? Mine does. A lot. He loves it and I'm glad he has some kind of exercise that he loves to do. Unfortunately, he tends to stick his face where it doesn't belong. Mostly into people's elbows. In the last few months he has broken his nose and had a nasty black eye. Without exception, he comes home with scrapes and bruises that appear out of nowhere. Is it wrong for me to worry about him so much every time he leaves for a game? One of these days, he's going to come home missing teeth. I hope it's not tonight.

-Tyler told me the other day "Mommy, can you clean up in here, the kitchen is really messy." Wow, Tyler, ouch. I have been really tired lately and my back aches all the time (stupid pregnancy pains) so I haven't really been up to par on my housekeeping. But you know it's bad when a 3-year-old complains about it. His toy room gets so messy that you can't even see the floor, but that doesn't seem to bother him. I cleaned the kitchen (tearfully) and then he said, "Good job, Mommy, you're a great listener." It's strange to hear yourself echoed through your children.

-Nicole never stops talking. Never. Unless she's doing something naughty. We found her behind the toilet (very small space) with a tube of toothpaste. Yeah, that was fun to clean up. But seriously, sometimes I can imagine the future conversations I'll have at parent-teacher conferences.
Me: How is Nicole doing in reading, Mrs. So-and-so?
Mrs. So-and-so: Well, she reads very well.
Me: (silently beaming with pride) I'm so glad to hear that. We practice a lot at home.
Mrs. So-and-so: Yes, I can tell. Unfortunately, she seems completely unable to read without speaking the words out loud. In fact, it's as if she has no inner voice at all. She just talks and talks non stop. She has actually started talking while inhaling as well as exhaling so that she never actually has to stop making noise.
Me: Great. At least we know she can read.

-I the need to confess that I just downed 6 rather large chocolate chip cookies. And I drank 2 glasses of milk with it. I don't suppose it matters that it was skim milk. I can actually hear myself getting fatter. I feel a little sick to my stomach from eating so many cookies so quickly, but I still want to eat another one. Dang you, Ben. Why do you have to be a cookie master?

-One last thing. Someone actually made me feel bad about not knowing the sex of my baby. I'm not even kidding. When I told her that we were going to be surprised, she said, "That sucks. I mean really. That's very selfish of you." I wish I could say that I had a good comeback, but I was so stunned, I just stood there with my mouth open. Apparently it's very selfish of me because other people want to buy gifts for the baby and it's more difficult for them if they don't know the sex of the baby beforehand. I guess I won't be getting a gift from her...

Okay, hopefully I've let out enough randomness so that I can get on with my life. On the brighter side, Nicole has moved me into the "Best Friend" position in her life. Tyler is pretty disappointed about it, but I told him that we could share Nicole and both be her best friend. It's amazing what a little ice cream will do to make a 2-year-old love you.
Posted by Kristi at 3:21 PM 3 comments: